It’s one of Germany’s most famous, picturesque buildings and a major tourist attraction – Neuschwanstein Castle can be surprisingly difficult to get to on foot as an independent traveller. This is possibly due to the fact that the castle and its surroundings get swamped by coach parties and are often included in tour packages. By taking this approach, however, people barely scratch the surface of this area and are likely to miss out on the incredible surroundings which can only be accessed by foot.

Getting to Neuschwanstein is quite easy if you only want to visit the castle and not see anything else. It is served by a bus service from Füssen and the Tegelbergbahn cable car is another popular option. Visit http://www.neuschwanstein.de/englisch/tourist/howtoget.htm for more information. This website will also mention walking from the ticket office, but my walk here will take in more of the wonderful surroundings and start from Füssen itself.

Considering I was travelling solo, I didn’t really care about expensive additions like a full-on breakfast with all bells and whistles, and wanted somewhere in the town of Füssen that exclusively suited my plan to hike up to the castles and back. As a result, I chose Steakhaus Füssen and at just €31 for the night, I was suspicious, but it turned out to be a shockingly good option.

Its location at the foot of the hills leading to the castles is not only convenient for a walker but also situated on a real beauty spot just next to the river Lech and the Lech Falls. The only downside is the distance between Füssen train station and the Steakhaus (about a twenty minute walk), but taxis are available.

Füssen itself is quaint and well worth a couple of hours of exploration.

I left the Steakhaus and followed the hill up from the little kiosk outside. Immediately (after two minutes or so of walking uphill) there is a small, open field which can be cut across or walked around – the resulting path you reach is the same.

The initial part of the walk heads up to the path overlooking Schwansee. It is signposted and easy enough to follow.

The Alpenrosenweg is the higher path and was extremely quiet when I walked it (May 2018). The lake will be to your left and following it all the way will lead you to a road that runs next to the Alpsee. 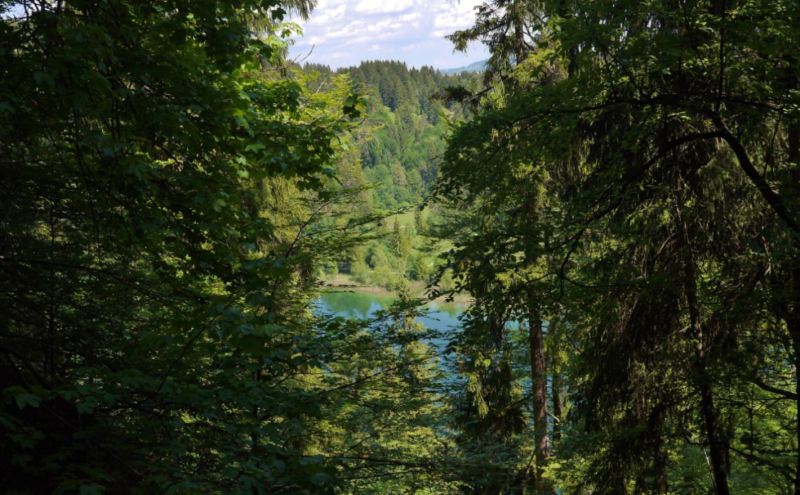 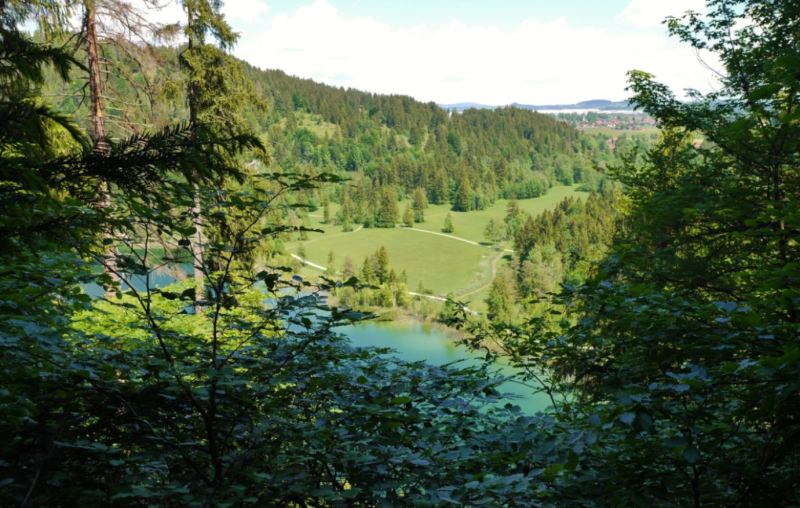 This larger lake (Alpsee) is the first place at which to stop and take some photos, and is likely to be the first place where you will see larger numbers of tourists as this is where Hohenschwangau is located. 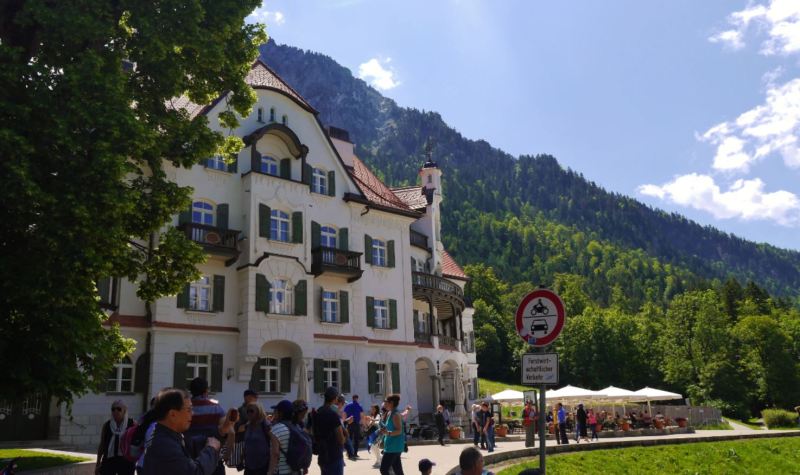 Alpsee (Hohenschwangau) up to Neuschwanstein

Push through the tourist groups and keep Schloss Hohenschwangau to your left. Eventually, you will get your first sight of Neuschwanstein higher up on the hills ahead. 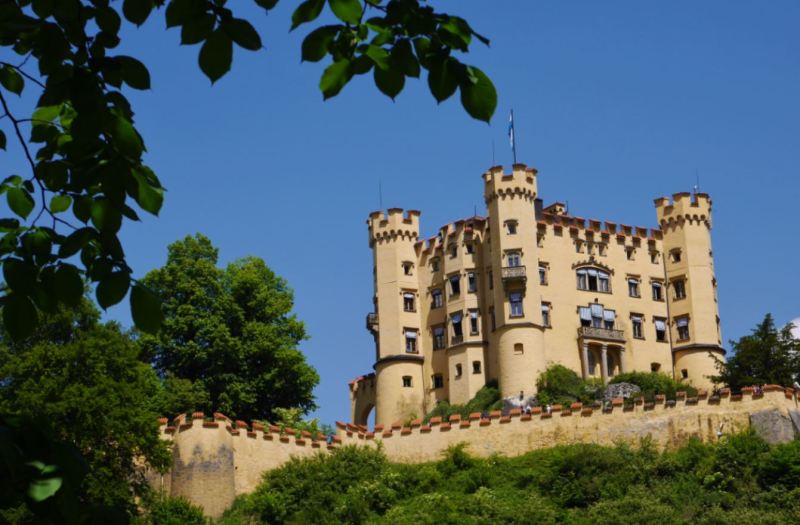 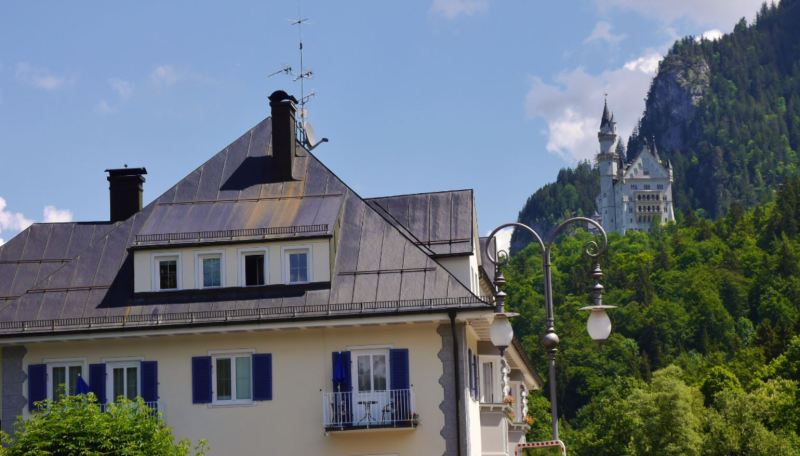 Turn right and walk uphill at the road opposite the Hotel Müller. Neuschwansteinstraße is surprisingly steep and although many tourists will take it on, many will also take the bus up to the ticket office.

Having neared the castle, my first port of call was the Marienbrücke as I had heard the views of the castle were rather nice from here. They were, although the nature of the bridge and the crowds mean it is not the most comfortable experience.

Instead, it may be a better idea to head a little further and turn left up some dirt paths that lead up to a better viewpoint with fewer people. As there are no fences, there is an uninterrupted view down the the castle.

Follow the path directly to the castle and you will be able to walk around the west and north sides of the castle.

Walking around the castle is free and there are also some pretty views down to the lakes and hills. Once I had taken in the views both of and from the castle, I was hungry and was able to satisfy my hunger with a big plate of Spätzle at the restaurant a few hundred metres down the road from the castle. Good value too! 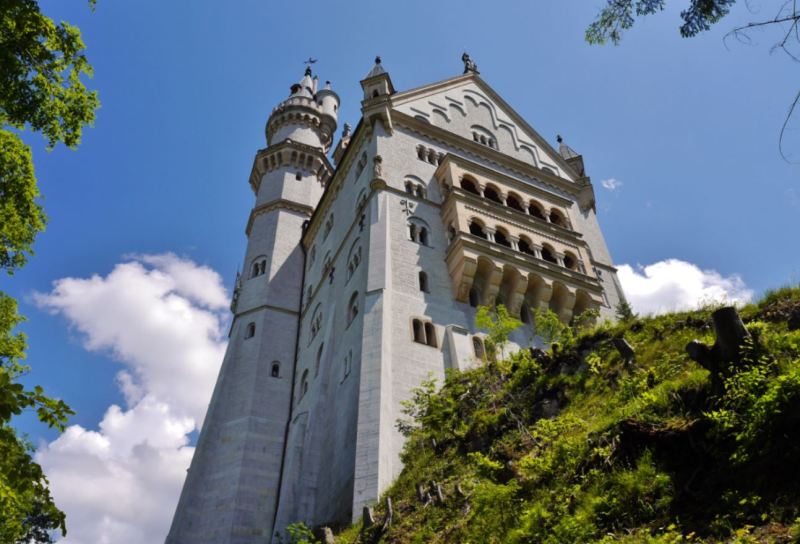 Head back down the main Neuschwanstein road towards Hohenschwangau again.

From here, I explored Schloss Hohenschwangau, walking around the gardens and heading through the archway towards the exit on the other side. I went this way in order to join up with the paths that would allow me to head back alongside the other side of Schwansee to the way I came up.

It is now time to rejoin the quieter paths in the woods, following signposts back down to Schwansee itself. As always, it is clearly marked.

Nothing more needs to be said now other than to relax and enjoy the walk back to Füssen. You can walk all the way along the lake, but don’t forget to turn your head back every now and then to check out the incredible views of the castles, mountains and forests. It is simple to get back to Füssen and the Lech Falls – as soon as you reach the outdoor climbing walls, you simply have to follow the road down, which will join the path you took up at the beginning. 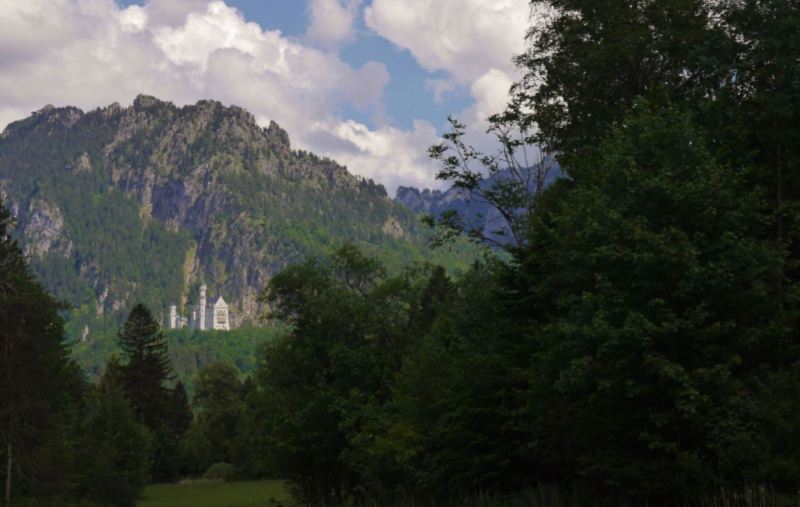 Germany has always had a special place in my heart, and I am not really sure why it took me so long to visit one of its most famous sites. I can only recommend, however, that you take your own way up and back – you will get so much more out of it than sitting on a coach and the photo opportunities are innumerable.