For a city full of so many treasures and sights, it is perhaps quite easy to overlook the watery gem that sits in plain sight to Muscovites every day.

Riverside walks were quite a common occurrence during my time in Moscow, and the River Moskva never failed to delight. I was lucky enough to live a few minutes’ walk from one of the quieter, more peaceful stretches of the river (which I will describe later as ‘Walk 2’) and naturally I was fortunate enough to experience the multiple, famous treasures in the heart of the city. Where else can you find such a small passage of water that passes the Kremlin (the KREMLIN!), the Cathedral of Christ the Saviour, a massive monument of Peter the Great standing atop a ship (which is both loved and loathed alike) and, of course, you can ‘follow the Moskva down to Gorky Park‘.

It can also change its form depending on when you visit it. I have yet to visit another major river that you can walk across quite naturally in the winter as it freezes solid, and I have seen locals quite happily trot along to the middle, cut out a whole and go winter fishing for the day. People take strolls on it, ski on it and, sometimes, even swim in it.

I had been planning on writing about Russia for a while but didn’t know where to begin. It’s a beautiful place. Truly. I wanted to begin with Moscow but also wanted to avoid the obvious. Therefore, I have chosen two of my favourite strolls alongside the Moskva and shared some pictures of them below.

Walk 1 – Luzhnetskiy Most to Gorky Park / Park of Culture 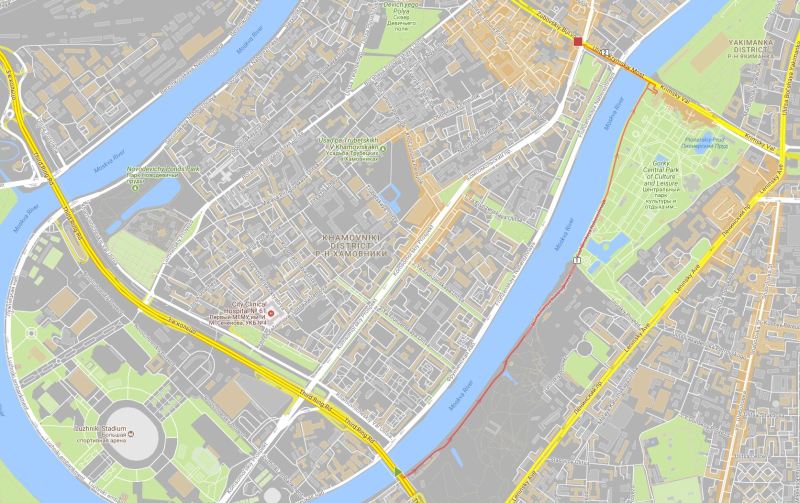 At the time of writing, the 2018 World Cup in Moscow is a mere months away (meaning this page will look dated very soon, but hey ho! Many of the later games in the tournament (including the final) will take place in the Luzhniki Stadium and while it is a rather magnificent building, the surroundings leave a little to be desired.

Football fans and walkers will similarly benefit from exploring a little beyond the stadium and heading upriver. For me, this walk started from the metro station Vorobyovy Gory, but only because I had previously visited the stadium area and also the wonderful nearby Sparrow Hills near the university.

The metro station itself is fairly unique as it is an island station, and one can either walk north or south depending on the side of the river one wishes to be on. I headed south.

Not only is it the longest platform in Moscow and the highest above ground, but it is the only metro station with windows! Hurrah! This might sound like I am being trite, but I do remember it being something of a surprise to leave the carriage and see natural light! The metro in Moscow is a deep series of museums, and not many stations on the Moscow Metro system are above ground. In fact, if you visit Park Pobedy, you might be lucky enough to travel up the longest single escalator in the world! I used to play football near this station and had to factor the escalator ride into my journey planning! Bring a book.

Back to the river, I want to begin by sharing the above pictures. In winter, the sun sets quite early in Moscow and the highlight of the walk by far was the view looking back at one of Stalin’s seven sisters as the backdrop slowly turned a glowing orange.

It is not really possible to get lost on this walk as you simply follow the river north. In the winter I was happily overtaken by people skiing along the path. It was clearly the best way to get around as most of the ground was frozen. In the summer, the walk would appear quite different – much greener and busier.

By the time you have walked under the Novoandreevskiy Bridge you will a couple of small ponds to your right. Frozen in the winter, of course, they provide a possible extension to any walk.

Next, as the path becomes wider, Gorky Park lays ahead and is also worth a visit if this is your only opportunity to see it. The summer months are the best months to visit Gorky since it is sprinkled with a variety of attractions.

To end our walk, I crossed Krymskiy Most and walked beyond the ‘Park of Culture (Парк культуры) metro station and chose the first restaurant that looked as though it sold a good Khachapuri. Fortunately, on a day when the temperature dropped below minus 15 degrees Celsius, I struck lucky.